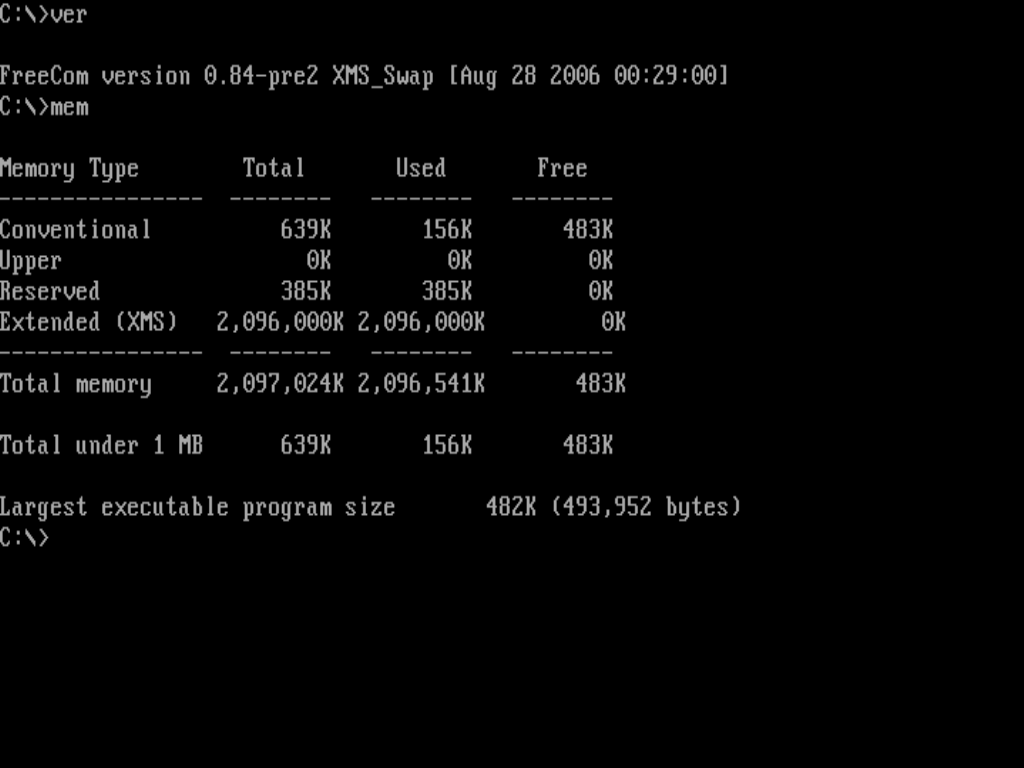 In this installment: some strange things I discovered when purchasing a FreeDOS laptop from Hewlett Packard. I suspect that the audience for this will be somewhat limited but I had fun exploring this. Perhaps you, dear reader, will find a chuckle in here too.

Some background: I recently purchased a HP ZBook 17.8 G8 as I run Fedora Linux I decided to have a little fun with the OS selection and picked the FreeDOS option (Other options include Ubuntu, and various flavors of Windows 11).

And! Sure enough: After unpacking and plugging in the laptop I was greeted by the following.

Apart from this appearing to be a very old version of FreeDOS the primary thing I noticed was how long it took to get to this point. I was also fairly sure that I saw something flash during boot which looked suspiciously like some Linux kernel boot messages. I saved whatever was on the hard drive from the factory to some image files before installing Fedora Workstation.

None of this appears terribly DOS-sy. It appears that HP is actually shipping a Linux and then running DOS in a VM. Let’s try to boot this whole thing in a VM and see what we get.

As the eagle eyes of you might have noticed the “HP Documentation” link appears to start some kind of PDF reader. The document at the end starts with the following:

What was in the factory image

Now that we’ve seen what the factory image does let’s have a look at how it does it. First of all: What are we booting?

So it appears we got a Debian GNU/Linux 9 installation on the hard drive. After some poking around I have found the following:

The actual /root/.xsession is copied below:

This is an… interesting approach, probably necessary because no window manager is started in the X session. Xdotool is used in this case to repeatedly try to resize the Qemu window until it covers the entire X session. Apparently after testing just doing it three times was “good enough”

What this basically does is the following:

At this point it is worth mentioning that the FreeDOS/HP Documentation menu is running inside the Qemu VM. The “real” bootloader (grub) does not have its menus enabled and just always boots straight into the Debian 9 installation on the hard drives.

What is this “HP Documentation” thing then. Did they package a DOS PDF reader? Well, only one way to find out. We have to go ONE LEVEL DEEPER (into /home/aos/qemu/freedos.img)

So it seems we have two partitions… Wait is there a C: and a D: drive in here?

Remember how I said there’s three operating systems on this machine? I lied: There’s four. The freedos.img file actually contains TWO separate FreeDOS installations however both are the exact same version.

After extracting the contents of the two FAT32 partitions I found the following:

This Linux appears to live in /live and it has a squashfs root filesystem. So… let’s have a poke at that too. This file is located on partition two in /live/filesystem.squashfs no points for originality there.

Most of the files in this filesystem seem to date back several decades so no convenient /etc/os-release file for us there. But we DO get an /etc/debian_version, there is no ubuntu_version so it appears that this is in fact Debian based.

It appears we have a 32bit Debian 6.0.3 installation. Judging by the release notes this release is from October 8th, 2011.

Down, down, down we go

It appears we have another image to dissect. This time the Debian 6.0.3 installation which shows us that helpful PDF telling us the PC is useless in its factory configuration. After looking through the various startup options the image appears to be doing the following:

Webconverger does a couple more things

When ordering a HP machine with FreeDOS what you are getting is the following:

Conclusions, such as they are

It doesn’t seem likely that the FreeDOS image as provided is actually good for anything. I didn’t really expect it to be but I was kind of hoping to install Duke Nukem 3D on “bare hardware” on a factory OS.

Based on the dates and how this is put together I assume that the contents of freedos.img are what used to be shipped on the real hardware. When NVME drives and other modern hardware features became the norm I suspect that this just didn’t work any longer. Instead of updating the image a VM layer was put in and the old factory image simply got included in the new one. It’s not a terrible solution really.

Someone at HP really needs to learn about what Window managers are for on X11, however, they could have saved themselves a lot of headaches. If anyone wants to build a system like this send me an email, I’m sure we can work something out 🙂

To round out this review below you will find some videos of the various boot options that shipped with the PC.

This site uses Akismet to reduce spam. Learn how your comment data is processed.